After a walk in central Athens in the late afternoon, we decided to eat souvlaki somewhere so that we don't have to cook at home.

Walking toward Monastiraki station, we found a hole-in-a-wall souvlaki shop called Piatsa Tylichto. Tylychto means 'wrapped' and it is the technical name for the meat on skewer or gyros wrapped in pita, which many in Athens just call it 'souvlaki', and Piatsa is Piazza in Greek. The name and the logo looked familiar and then I realised that there was the same in central Glyfada. 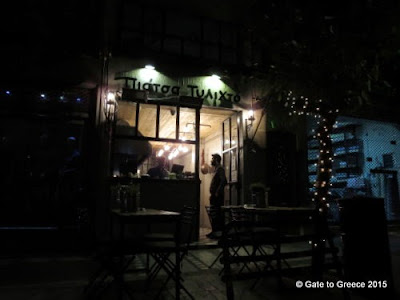 This one has only some tables on the pedestrian walkway in Aeolou Street. Patrons just buy food and walk away, or have seat just to finish what they've bought.

Most of the tylichta cost 2 Euro, except for veal gyro wrap for 2.80 Euro. It has gyros, but not kalamaki (meat on skewers) and, instead, it has grilled fillet of pork or chicken. 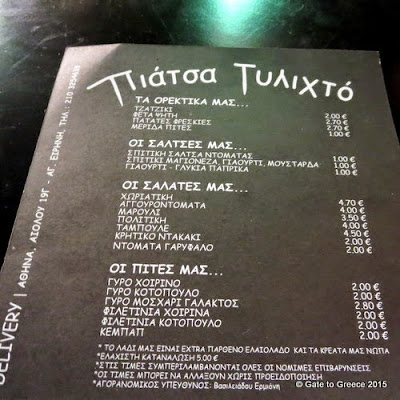 We ordered 1 chicken gyros wrap and 1 chicken fillet wrap. Rather small in size and lack of fried potatoes surely made them light, too. The meat wasn't bad. 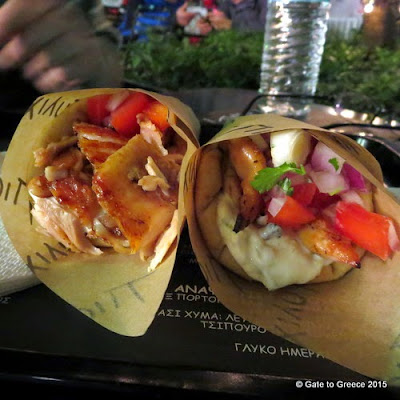 Not a memorable meal, but it is good to know where we can find a souvlaki in a light snack version.

Hello, Please write something about Easter in Athens, what to expect, where to go where to eat, festivities…etc., Thank You,

Our hotel is fairly close to this location. Looks like this would be a good place for a snack in between meals if we need it.

Hi Katrina,
In the area there are so many shops where you can grab nice bites. Enjoy Athens!